Kathy's back on Bravo for a new stand-up special. I lost count but this is like her fifth or sixth one. When she was in Seattle a few weeks back she mentioned she had just finished filming her latest special. So expect a lot about Britney, Marie Osmond, and The View. And mostly is her great recounting the stories from her great and controversial Emmy speech.

Set you TiVos! Ted, I already set yours.

Barbara is a Tool! 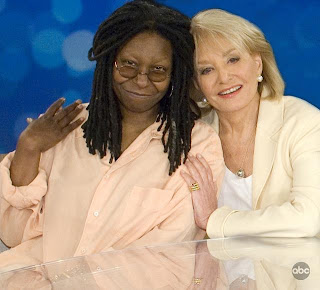 So Barbara often says she doesn't like to express opinions since she is a news person. That's a great policy, but she still knows where her paycheck comes from. Today on the View, she shut down a very interesting pro-writers Hot Topic discussion. The writers are fighting the networks (and production companies) and that is ultimately who Barbara is loyal to.

The writer's strike is the biggest story in Hollywood right now. Or really it should be but isn't. Entertainment Weekly has a story on the strike in every issue. The latest issue had four stories. But that's a magazine. The entertainment news programs, like Entertainment Tonight and Access Hollywood, barely talk about it. That's because those in charge of the shows are the opponents of the strikers. If I were them, I wouldn't give publicity to my enemy either.

Today Whoopie snuck the strike into Hot Topics since that was the reason a couple guests decided not to come on the show as scheduled. Whoopie and Joy talked about who is on strike and why and why that aren't and what guilds there are in and that they support the writers. Barbara said, "you are boring everyone," and they moved onto another topic. While it wasn't as captivating as the British septuagenarian women bonking young Kenyan men, it was still one of their best topics. I'm sure someone was yelling in Barbara's ear piece to get off the topic. She is such a tool. 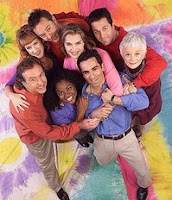 Why is Charles in Charge on DVD and not Suddenly Susan? I didn't watch the show when it was on but now that I love Kathy G so very much, I want to go back and see them. You can help by clicking on the Amazon alert link. Amazon shares the demand for DVD titles with the studios. You can also help by not watching Charles in Charge.

The long wait between season 3 and 4 of Battlestar Galactica is a little easier with the new BSG movie premiering on Saturday. Battlestar Galactica: Razor tells three stories. I had heard it was going to be just the story of the Pegasus in the early months of the war before it joined the fleet. I'm interested to see how they discovered Gina was a Cylon. I'm still not clear how anyone figured that one out. There are two more stories weaved into that one, one in the past with young Adama, and one with Apollo.

I think the Apollo story might be a stretch, but anything with Jamie Bamber is OK by me. More shirtless locker rooms scenes please! I attached the photo purely for my own happiness.

Season four continues in April. Ugh, what if I get hit by a car before then?

Since The Daily Show with Jon Stewart and The Colbert Report have been dark due to the writers strike, I needed something to watch in the morning while I'm getting ready. I have settled nicely into E! True Hollywood Story. Since there are more than 300 episodes it will take a while for me to see them all. And I really think they update the older ones with current news so they don't seem stale. I put E! True Hollywood Story on my TiVo to catch Kathy Griffin's episode. I've watched about a dozen episodes now including: Bobby and Whitney, Ellen Degenerous, Mary Kay Letourneau, Demi Moore, Ty Pennington (only 30 mins, he needs to drink and drive some more), Jonbenet Ramsey, Laci Petterson, and Robert Downey, Jr. The thing I love is the starting, "This is the true story of [insert name], the E! True Hollywood Story." They don't do that in the newer episodes.

I was a little confused as why high profile murders and crimes outside of Hollywood get a True Hollywood Story. But these stories get so much press they become part of the collective entertainment for the country so I think they fit. Plus Scott Peterson is hot! Too bad he killed his wife.

You Just Got Slapped

Even if you don't watch HIMYM, this video is hilarious:

Last year on How I Met Your Mother, Marshall and Doogie made a bet. Marshall won and he was able to slap Doogie five times. He did once in that episode and once to put an end to the horrible one man play. A few weeks back a website appeared: www.slapcountdown.com/. The countdown ends at tonight's episode called Slapsgiving. The group sits down for Thanksgiving together but Barney is hung up on the impending slap. Two more left after tonight. I still want to see the return of Robin Sparkles.

It is not so much a "who" had the best week ever this week, but a "what" and that what was Moral Bankruptcy. It's all about this viral video call Two Girls One Cup which is so horrible to believe. People are making reaction videos to watching the horrible thing. I thought I would get into the action. I only made it through 22 seconds of the video. Don't ever watch the video. Here's me watching it:


Last Week Midget Mac from I Love New York 2 had the best week ever. Here's his audition video, I think:

Stunt Casting is when shows pick high profile actors for roles which generate media buzz and thus some free publicity. The Simpsons and Will & Grace are/were great at this. But the life-time achievement award in stunt casting has to go to Smallville which continually picks actors from past Superman movies and shows. This started from the beginning with Mrs. Kent played by Annette O'Toole who played Lana Lang in Superman III. They continued with Terrance Stamp (Superman II's Zod) as the voice of Jor-El, Christopher Reeve as Dr. Swan, and Margot Kidder (Lois Lane in the movies) as Dr. Swan successor. Although after a couple episodes she was found murdered because the actress is koo-koo-bananas. Recently they had Dean Cain (from Lois and Clark) as the Immortal. He was captured at the end but since he is immortal he can easily return. Tonight Clark meets his Krptonian mother (or some sort of Fortress of Solitude clone of her) played by the actress who played Supergirl in the 1984 movie I didn't see.

Here's who I'd still like to see: Ned Betty, Gene Hackman, Susana York (Kryptonian mom from the movies), John Shea (Lex from L&C), Traci Scoggins (Kat from season 1 of L&C), and of course Teri Hatcher.

Soap: An Examination of the First Gay Sitcom Character 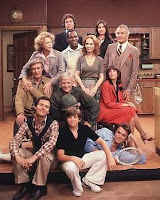 Recently I watched Soap Season 1 on DVD while working on a big LEGO project. This show debuted 30 years ago with much controversy over Billy Crystal's character Jodie, the first out gay character in a sitcom. When I originally watched the show in the 80s in syndication I didn't think that was a big deal. Three's Company had tons of gay jokes, even though Jack was a fake homo, and that debuted six months earlier. All the dialog around Jodie's character was about his character being gay. This must have been quite a big deal 30 years ago. Sadly as the series progressed he became more and more straight. By the end of the first season, he has sex with a women (eww!) Carol, who he met at his Aunt Jessica's murder trial. His big cliffhanger for season one was the return his ex-boyfriend Dennis the Quarterback. In a funny note, the actor who played the gay athlete was a real life "pole vault" Olympic Gold Medalist. At the end, Jodie is supposed to be struggling with the choice of returning to a hunky pro-football player or his bitchy and deceitful new girlfriend. Who do you think the network made him choose?

The clear breakaway character is Benson. As the dialog with and about Jodie was all gay, Benson being the only black character had lots of racially related jokes. He and Jodie were considered suspects in the murder of Spencer for Hire because they were black and gay, and no other reason, pointing out the absurdity in racial profiling long before that was even a word. After two seasons on Soap, Benson went onto to his own show for seven seasons.

Season 4 of Project Runway starts tonight. All day long Bravo is running last seasons episodes in a marathon. Back again are Heidi Klum and TV most eligible gay bachelor, Tim Gunn (Anderson Cooper has a partner). 15 new designers get their chance at fame. Heidi was on Ellen this week and she said it was going to be more of the same old shit with new faces. After The Amazing Race, this is my favorite reality show.

So why were there only 22 episodes of season 2 of Star Trek: The Next Generation when all other seasons had 26 episodes? The 1988 Writer's Guild Strike. The last strike was 19.5 years ago and it shut down Hollywood for 5 months delaying the 1988 until October/November.

What is the immediate result? All the daily shows are off the air for now. Ellen, The Daily Show, and The Tonight Show will be in repeats all week and presumably until the strike is over.

The result on the rest of the season will depend on how long the strike lasts. Ugly Betty and Heroes and all the others could have a shortened season. Shows through the end of the year are fine. If the strike continues into 2008, network television will start of grind to a halt. The only thing we could be seeing for a while is reality TV.

Who knows what will happen to LOST with it's scheduled 16 episode season. If they can't make all 16 will they add more episodes in the future? We will have to wait and see.

The fifth season of Nip/Tuck started this week on FX. I've decided to drop this show this season. I've enjoyed it from the beginning but it has certainly jump the shark. The JTS moment might have corresponded to the move from Miami to L.A. but I don't think that is the problem. The problem is the complete devolution of the supporting characters. Julia, Matt, and Kimber used to be interesting characters, but they have run their course. I don't need to see them ever again. I was very happy when she moved to New York last season with the two kids who are completely screwed up yet only to be disappointed to find out she is still a regular cast member. Matt and Kimber became scientologist last season and got pregnant. This season things are going a bit better for them as they become meth addicted drug addicts. I don't want to see any of them ever again. If the new season was just about Sean and Christian in L.A. with new friends and co-workers, I'd be back for more. Until they cast off the dead weight, the show is dead to me.

And what is with the promotional campaign for the fifth season? The clipped angel thing makes them looks like detectives, not doctors. I don't get it...but I love their outfits.