X-Men rip off are all the rage on TV. I love 2/3 of them. Painkiller Jane is awful.

Last week The 4400 ended it's fourth season with yet another this-changes-everything season finale. This time the forgotten younger brother of the leader of the "good" x-men group took the promicin shot to become an x-man. Of course his ability was being able to create a promicin virus. Everyone he can in contact with became infected and began to infect others. 50% of those died and the others became x-men themselves, including the way-to-good-looking head of NTAC. But will sexy uninfected Tom Baldwin take the shot on purpose? The book from the past says "yes". 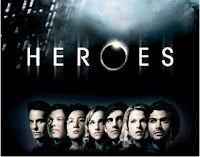 Just a week after The 4400 ended, x-men where back on TV with a new Heroes. A great start to a second season. Matt and his SSDM Mohinder are taking care of Molly and trying to infiltrate "the company". Claire and family are trying to be normal but another fly-boy has entered her life. Hiro is in the past hanging out with his idol Kensei. Is he an x-man? Sulu got tossed from a building, but will that kill him. If so, for how long? Who was the assassin? Nathan has gotten all scruffy and Peter is looking hot in Ireland. The two x-men come from Central America seem to kill people. They are looking for Mohinder. Soon Veronica Mars joins the cast. Yay, Veronica!