When it was announced that Ally McBeal was moving to a recurring character, I was skeptical if the show would still be good. But the show really shifted away from Catco this season. Which was also a bummer because I loved Andy from Cougartown as Snapper. Also introduced this season was Lena Luthor who took on some of Cat's role as the outside perspective.

Alex had a great storyline as she came out as lesbian and started dating Maggie the cop. Yay for diversity.

Keeping with their strong women theme, Lynda Carter joined the cast as the President of the United States. She is actually an alien in disguise, of course. But when her life was threatened, Supergirl has to spin around to stop a fire in the best homage to Wonder Woman ever done.

Keeping with the classic Smallville type stunt casting, the end of the season Big Bad was Rhea played by Teri Hatcher. She was Mon-El's long lost mother. She brings an invading fleet of ships and plans to enslave the Earth until they are stopped by Supergirl. Teri Hatcher was Lois Lane to Dean Cane Superman. They did not have any scenes together.

One of the best things about this season was the cross-overs with the other DC shows. There weren't actually on this show, but Supergirl helped save Earth 1 on The Flash/Arrow/Legends and then was stuck in a gangster lounge singer fantasy with Barry. It was the second best musical episode of the year.

But the best thing about season two was definitely Mon-El. He is easily the hottest guy on TV right now. I enjoyed his arc this season as his back story unfolded. I really want him back for season 3 but based on the finale, that is up in the air, or through a wormhole. 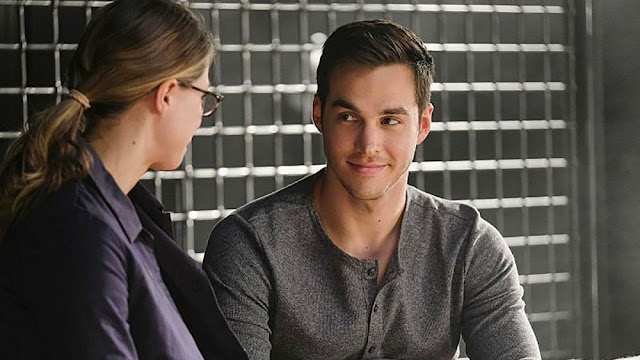