Shows that get a second season

The upfronts were this week so I have several posts planned about the new fall season. First up, shows that were new last fall that got a second season pickup. This list does not include mid-season shows. 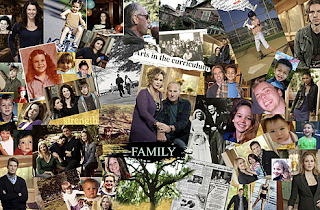 Parenthood
What I said last May: Since ABC is making Eastwick, NBC is resurrecting an old 80s movie into TV form. That movie was great because of the cast, who knows if this will capture the magic.
What I said last September: The movie was great and like 20 years old but I look forward to the very few episodes I expect out of this.
What I say Now: The show was moved to mid-season because NBC had a retarded season with the Jay Leno failure. The biggest surprise was that this is a drama, not a half hour comedy. I'm really enjoying this and it makes me super happy I don't have kids.

Community
May: A comedy about a study group at a community college. With the Soup and Seattle native Joel McHale and the awesome Chevy Chase this show is sure to be a hit. It looks like the funniest show of the fall. I always say the funniest shows come from NBC. Expect Arrested Development.
September: Joel McHale from The Soup is the star of this new sitcom about a bunch of characters at a community college. It looks like the best new comedy of the season.
Now: It's hard to pick a second favorite comedy after 30 Rock but this one is up there. The paintball armageddon episode was one of the funniest episodes of any show ever. I look forward to more zaniness from a great collection of characters

Glee
May: OMGYG! I'm so pissed that the pilot last week is all we get until the fall. This show was so good I was so expecting at least seven episodes this summer. I guess being pissed they produced an awesome show isn't too bad.
September: This premiered back in May and I love this show. Love it. Love it!
Now: One of the most inconsistent shows I can't stop loving. The writing can at times be the sloppiest on television but as the only successful musical television show in modern times (Cop Rock? Viva Laughlin?) and a great cast I can't stop loving it. Can't wait for the regionals in June!

Cleveland Show
September: This was initially a mid-season replacement from last season. Cleveland from The Family Guy moves to Virginia and marries his high school sweetheart. Looks awesome.
Now: Seth McFarlin has made another entertaining show which is essentially the same formula with different character. Still, this show pushes the limits with Cleveland being a pimp and the leader of a teen drug ring. Plus the bears are funny.

Cougar Town
May: Monica from Friends plays a older women trying to date younger men. Didn't Courtney Cox marry a much younger man?
September: I love Courtney Cox Arquette although I don't think this show will be success. Maybe 6 episodes I guess.
Now: From the first episode I loved this show. The characters coalesced throughout the season and now they are kind of the fantasy neighbors one dreams of. I wished I lived on their cul-du-sac. 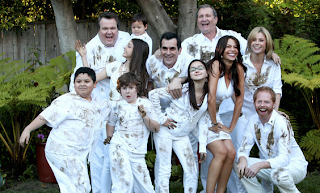 Modern Family
May: Another family comedy about an over scheduled modern family. The online clip was all about scheduling a time to administer corporal punishment to the son. "It's on the calendar now, you can't complain about it." Maybe, I don't know.
September: Why watch Parenthood, which was about family life in the late 80s, when you can watch a total new and original show about three different families. One of them is a gay couple with an adopted baby
Now: The pilot had a huge surprise when it was revealed the three families were all related. Initially there was going to be another character who was a Swedish foreign exchange student who lived with the family as kids and returned to make a documentary about them. The character was cut (for now?) but the documentary style remained. This show is so consistently funny I want to watch it right away.

The Middle
May: The Janitor from Scrubs plays a dad with a middle class family in the middle of America (Indiana). I can't think of the last successful family comedy so I'm hope this makes it.
September: I can't watch every new comedy, sorry.
Now: Good for them for being renewed.

Shark Tank
September: A new reality show where inventors and innovators bring their ideas to a group of five real life investors. This looks like could be quite interesting but filled with lots of super embarrassing situations. For that reason I won't be watching it.
Now: I've caught glimpses of this show and it is the worst. I hate reality shows that take themselves way too seriously

NCIS: LA
May: Well it's NCIS but in L.A. Is there a lot of naval investigations to be had in L.A.?
September: What is NCIS? There's a spin-off now? Who watches this?
Now: This is kinda a huge hit but I have not and will not ever watch an episode.

The Good Wife
May: The wife of a scandal deposed Senator goes back to work at a law firm after her husband goes to jail. I like lawyer shows but this just looks boring. Why would she go work at such a cut throat firm? There are lots of smaller single-mom friendly places she should go work for especially with the connections she has as a Senator's wife. Fake office tension is one thing I cannot suspend my disbelief for.
September: I find the concept good but the execution awful. So a disgraced politician's wife must go back to work after her husband is put in jail. Sounds good. But she chooses a cut-throat trial law firm with lots of hungry 20-somethings. It would make a lot more sense and be a lot more original if she became a lobbyist. Lame, don't watch.
Now: A few weeks back I got a TV guide and I stared at the cover for several minutes before realizing this cast was on the cover. I can't understand why anyone would watch this show, it looks so painfully awful.

Vampire Diaries
May: Really? Do we need a new vampire show every year? Moonlight then True Blood. Now a teen romance vampire show on the CW. I can't stand it.
September: I will not be watching it. And it's not because the vampire landscape is totally over full with True Blood and Twilight. It's because I refuse to accept that this love triangle with two vampires and a human could ever exist. I'm 38 and I would probably take the opportunity to have sex with an 18 year old. But I could never have a relationship with him. So these vampire brothers are like 80 years old or what ever? How could they possible want to have more than a brief affair with this teenage girl? It's just weird. At least Sookie is in her 20s on True Blood. Other than the love triangle, there's also Buffy elements of demons and supernatural stuff. Hasn't this all been done to death, so to speak. One good thing is has Boone from Lost.
Now: I've heard almost nothing about this show since it had been on. I have no new opinions on it. 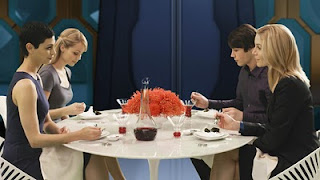 V
September: We have to wait until November but we get: Inara/Adria, Agent Baldwin, and Juliet all in the same series! I'm happy they are remaking this classic show from my childhood. I just hope they don't do the whole stealing-the-water story. There's so much water in the galaxy, there's no need to pull it out of our gravity well. Go gerbils!
Now: Originally this was a mid-season but they pushed the first four episode to November. I'm not sure if that was the best decision. Irregardless, the show is starting to develop its own really good mythology. The friendship between Anna and Erica was completely unexpected. It's funny, as soon as I found out it was filmed in Vancouver instead of NYC, I suddenly gave the show so much more slack. All SciFi shows are produced in Vancouver so I had higher expectations of one made in New York. I only caught that one iconic Vancouver building in one shot so far. I like how the aliens get "infected" with human emotions and that is becoming their downfall.

Comments:
So I would like to comment on the Vampire Diaries. It's totally Gossip Girl with Vampires and it's awesome. I love anything that has Vampires because I want to someday marry a hot Vampire so I'm trying to learn their culture.