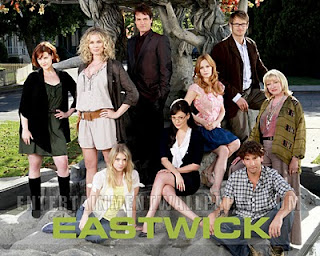 Eastwick
This surprised me. I thought the show started really strong, I don't know why it didn't build a great following. They effed up the ending and didn't air one episode. That didn't make sense to me.

FlashForward
I was looking forward to this show more than any one this season. However, by about the fourth episode something didn't seem right. When Charlie showed up things started falling apart even faster. Friend of DTVB Matt stopped watching it a few episodes before me. When Charlie and the guy who was sleeping with Penny chose to decide whether to come public with the experiment that cause the blackout over a poker game, I turned off the episode half way through and deleted it from my season pass. I watched the special catch-up episode and it only got worse.

The Deep End
Another awful lawyer show. I never watched this.

Hank
Now that Kelly Grammar is a out Tea-Bagger, I'm not watching any of his failed shows any more. Not that I watched this or his last failed show.

Accidentally On Purpose
This show turned my stomach. I'm so glad it was canceled.

Three Rivers
I've never been a fan of medical dramas. Unlike cop or lawyer shows, there's only enough room for a few of these on TV and Grey's Anatomy and spin off have those covered.

Trauma
Have paramedic shows ever been successful? There was Emergency and Third Watch...

Melrose Place
I think Ashley Simpson doomed this show. Ever since her SNL failure, I've boycotted everything she does and you should to.

The Beautiful Life
This show was canceled after only two episodes.

Brothers
I think this show might have been on before The Simpsons but I couldn't tell you much more about it.

Jay Leno Show
NBC really failed this season and the well publicized Leno vs. O'Brian show down was the main reason. They failed to develop any new show other than Community. Parenthood became a hit after Jay's cock-blocking five hours a week went away. Now they lost Law & Order. WTF? Hopefully they can pull things around next season.

Comments:
I was huge fan of eastwick and imhonestly can't figure out why they cancelled it. Yes, ratings, but now it takes a while for shows to hit their stride.

As for the rest of the shows, it's entertaining to read the list and think of how bad the shows looked from the start.

The Deep stands out to me because when I saw the ads I knew it was the networks just trying to do a David E Kelly show but they need to learn they just can't do it without him.