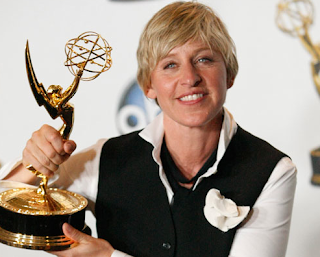 The big news of the day is Ellen is joining the cast of Idol. I love Ellen and this is totally going to get her Giraffe money. Long ago on her talk show she said how Michael Jackson was so rich that he could afford a private zoo with a Giraffe. That's rich. She is totally on her way there. She also signed up for many more talk show years, to at least 2014.
I'm sure she will be great during the regular Idol season. I'm not sure how she will make it through the city audition phase. She is so nice I can't see her sitting there day after day while people have their dreams crushed in front of her. I know the other judges have all come up through the music industry so they are used to this. It might have been as hard for her in the comedy circuit. Although she was the first female comic on the Johnny Carson show to be called over to the couch after her routine. That was very big.
I've really gotten into Idol in recent years and this is just another great reason to watch!

Comments:
I actually watched the beginning of today's show. I couldn't believe it. I almost thought she was joking. In the show business world this is huge news. I'll be sure to watch Idol this year. Thank goodness for dual tuner TiVo.