This Week on "Celebrity..." 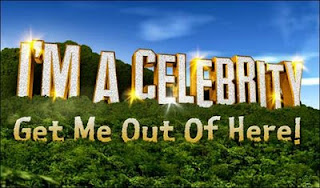 OK so IACGMOOH is really entertaining. I'm glad I'm giving over five hours of my week to this show. Lots of crazy things happened this week. (Caution, spoilers)

Heidi and Spencer came back. After spending the night praying in the stupid Love Shack, they were eligible to come back to camp. But first their return had to be approved by the other campers. They voted and Speidi was allowed to return. Yet it seemed like less than a day and they were gone again. This time was due to Heidi's illness which was most likely because she wasn't eating. She went to a local clinic who sent her to a real hospital in the Costa Rica capitol of San Jose. And thus they were gone for good. Thank the gods. As a happy atheist, I'm very happy they were on the show. They were the most typical new Christians from my experience and I think their retarded attitudes will turn some possible converts away from stupid organized religion. Go Speitards!

The "coming up" announcer is so lame. On Monday he said something like this. "Coming up, will Heidi and Spencer be allowed back into camp. And later, Heidi doesn't like was Janice is saying." Well if Heidi and Janice have an argument, of course that means they are allowed back to camp. Lame!

Holly is in, Daniel is out. Holly Montag, Heidi's sister was added to the show. She is nothing like her sister. I think she is possibly the most comfortable women in the jungle. And in the elimination this week, Daniel Baldwin was voted out. It's too bad I really loved the Steven-Daniel dynamic.

Sanjaya is straight? The show is setting up a love connection between Holly and Sanjaya. Is it real? Is it just a friendship? Is it a gay-fag hag relationship? Whatever it is it's cute.

Janice is a crazy kleptomaniac. She has no idea where the cameras are. So she was completely unaware they caught her stealing food on night vision camera. She is a huge waste of skin.

Patti is completely delusional. She went on and on about how their friends abandoned her husband. She is completely incapable of seeing any other point of view. If there was obvious audio evidence that one of my friend-colleagues was comically over the top corrupt, I'd abandon him/her too. Stop being a stupid emotional woman and think about your ridiculous over the top situation from an objection point of view for once.

In this post I coined the term "Speitard". It will be sweeping the nation very soon.