Reality Show Round Up

There are a surprising amount of reality show starting up or returning right now. Here are some you should watch, consider, and avoid 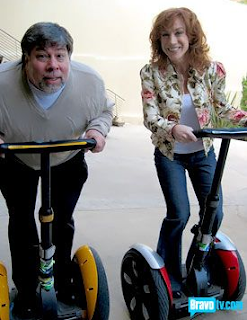 Kathy Griffin: Life on the D List - Returns 6/8/9 on Bravo. This show has taken home the Emmy for best reality show two years in a row. It's funny and some times heart wrenching. I can't wait to see what crazy antics Kathy gets up to this year!
Exhibition Africa - 5/31/09 History Channel - A group of survivalist trek across the African wilderness with no backup support. It looks to be full of challenges and cool wildlife.
Tori & Dean: Home Sweet Hollywood - yesterday on Oxygen - I really enjoyed last season. At the Bravo awards Tori thanked all the people who make fun of here like Chelsey Handler. She is a good sport.
Tosh.0 - 6/4/9 on Comedy Central - A new weekly clip show which discusses and shows the best stuff from the Internet. VH1 had a show like this a while ago. I wonder what happened to that?
Kendra - 6/7/9 on E! - Girl Next Door Kendra has moved out of the Playboy Mansion and is getting married to a football player. She is a total dimwit but I love her.
Brooke Knows Best - 6/7/9 on VH1 - Season one was great and totally staged. When Hulk showed up at Spring Break I laughed my ass off. Plus her gay BFF is really cute.

Consider Them!
Top Chef Masters - 6/10/09 on Bravo - Bravo does reality competition really well. I keep hearing good things about Top Chef. I might watch it this year.
E True Hollywood Story - tonight on E - OK this isn't a new season since this seems to run continuously. But tonight is the 500th episode of THS. They are always entertaining.
Real Housewives on New Jersey - two weeks ago on Bravo - I've only watch the Atlanta edition of Housewives but they get a lot of coverage on the clip shows so I think I might pick this one up.
I'm a Celebrity Get Me Out Of Here - 6/1/9 on NBC. Two words: Sanjaya! He might be worth watching the horrible Heidi and Spencer for.
Intervention - This Week on A&E - I watch this now and then. It gets really hard to watch after a while, especially after a few where people don't get better. Usually the alcoholics fail more often than the drug addicts. I've never seen anyone with a pot problem who needed intervention.
Obsessed - This week on A&E - This new show from the producers of Intervention is about people with Obsession disorders. The first episode had two people with OCD. They both responded well to treatment. The hunky gay germaphobe even had his boyfriend move in and they got a German Shepherd. Dogs are a constant mess maker so this was huge for him. Good job!
Wipeout - tonight on ABC - This show is always good for a laugh if not to just here the host say Big Balls every week.
Charm School with Ricki Lake - Last week on VH1 - VH1 can really recycle its reality stars. Real Chance at Love and Rock of Love skanks compete for a very small cash prize. The last two seasons were great. Let's see how Ricki Lake does as Head Mistress.

Avoid Them!
Denise Richards: It's Complicated - Bravo. She is so gross. I couldn't imagine watching one minute of this.
Jon and Kate Plus Eight - Returned Monday on TLC. Isn't it convenient that all the affair rumors happened just before their show returned for a new season? She is such a controlling bitch I can't believe Jon hasn't killed himself already.
The Little Couple - This week on TLC. Another LTC disaster. Newlywed little people try to cope in a big people world. Boring.
Ice Road Truckers - 5/31/09 History - It's just how I want to spend my summer, watching truckers drive on a series of frozen lakes in the dead of a north Canadian winter to deliver mining supplies.
Hammertime - 6/14/09 on A&E. MC Hammer is back with a new reality show. Please spare us all.
Tattoo Highway - 5/27/09 on A&E - I don't know why there are so many tattoo shows out there? This one has a tattoo artist traveling the country on his tattoo bus.
Gene Simmons Family Jewels - 6/7/9 - Unless you are a KISS fan avoid the new season of the family that is trying to be the Osbournes.
The Bachelorette - last week on ABC - While at the only motel stop on my California road trip, I turned into the first episode of the new Bachelorette last week. They picked the girl who made out with the loser in the top tub. That clip made all the rounds because it looked like he was penetrating her. She gets to choose from 30 losers on her own. The big problem is none of them are from her home town of Vancouver, BC so someone will have to move if things work out. But they never do.