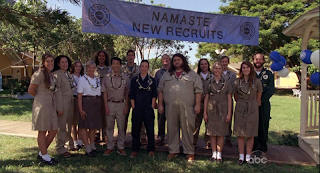 New LOST tonight. But I'll be watching it tomorrow morning on my laptop. Last week I did send a nasty letters to both DISH and Fisher Communications. I blamed each of them. They both suck. I need to see if I can get out of my DISH contract and switch to DirectTV.

Anyway, last week's episode kick ass. Kicked Jack's ass to be specific. While Jack was descending into a shame spiral of Oxycontin and facial hair back in L.A., James was developing real leadership skills. It's good to see Jack kicked down a notch and forced to cleaned toilets for a while. Speaking of characters I don't like anymore, if Kate breaks up James and Juliet I will find the Lamppost, go to the island and throw her off a cliff. Jack seemed irredeemable at the end of the third season and now he's coming around. It is going to be a long road for me to like Kate again. The other big new development was Christian's reappearance. This was the first time he actually directly interacted with someone for the first time. He handed the photo to Sun. In the past he only appeared and talked to people. My theory is Christian had some previous experience on the island. When 815 crashed he was resurrected the same way Locke was. He's been working directly for Jacob since the crash. That's just what I'm thinking.