LOST 4.05: For Christmas I'm Getting You Control Issues 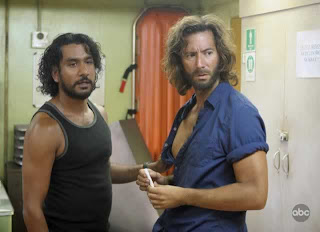 Besides being a really great time travel episode which opens up lots more questions, this episode really cleared up some big holes in Desmond's back story. About the only thing we don't know is the reason he went to prison. The Desmond-Penny story really is a most magnificent love story.

The "Constant" in this episode and the entire show in general is these character with huge control issues. Keamy and Omar yelled at Frank for leaving the island with Desmond and Sayid. Dr. Ray yelled at Sayid for talking to his patient. Keamy and Omar and Dr. Ray didn't want Desmond to talk to Daniel. The Sergeant wanted Desmond to follow his orders. Charlotte didn't want to Daniel to talk to Jack and Juliet about the island's time dilation properties. Why can't everyone just work together for the common good?

Here's what we've learned:
And some new questions: