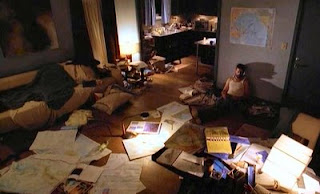 I'm breaking this weeks entry into two. This part will be all about the events off the island. Something seemed strange to me about this from the beginning. And even in the first scene I proposed that maybe this was in the future. Things just didn't fit the timeline. Jack's wife was long gone and pregnant. How could Jack go from being a bearded alcoholic pill swallower to the guy who had it together enough to eject his father from surgery? Then there was his phone. RAZR phone came out just before the events on the island so it is very unlikely he would have one. But by the end we discovered it was not a flashback but a future flash. This is something I was hoping they would do from the very beginning. I always thought the last season should have future flashes where we slowly see who made it off the island while the final events of the island unfold. Near the end of last season, Jack started being a dick. This episode brings him back as we see there were consequences for his arrogance.
Anyway, here's what we know:

The biggest question is this: Is this how the show is going to end or this getting off the island only part of the story? Will future Jack join up with some others trying to find the island? Will season 4 start in 2008 as people try to get back to the island and flashback to the events in the in between years? Or will there be three more seasons of more of the same until people go back to their terrible lives?

Comments:
After thinking about it for a day, I think that show was a transition from the past to the new present. That is, next season will start at the time of the new Jack and Kate and we'll have flash backs to what happened when they got off the island etc. There can't be that much to tell about that, anyway. It's not like they would have hung around for very long.

I can't wait 'til they go back!

ummm... THANK YOU. I have been looking up people's responses, and just like rosie said, people are turning her into the bitch and elizabeth in the nice guy. She is so uneducated and automatically deflects everything that disproves her beliefs. If Rosie didn't come off so belligerent, more people would be able to see the honesty in what she says. But it's easy to move attention away from her words and onto her disposition, dismissing anything she says... that's why it's so amazing that alicia silverstone quietly made her statement. And yes, that elizabeth chick is fucking obnoxious and "glib"