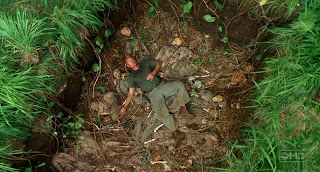 I enjoy the Ben story but I was disappointed it wasn't a better episode. The best episodes are those with a flashback story that closely matches the main story. While Ben's story answered a lot of questions, it didn't match the John and Ben going to meet the wizard story. But it was still good. Even with the problem with Portland. 32 miles outside Portland in December people would not be hiking without hats and gloves. People would not be driving around in a convertible with only a light jacket. But the show is written by people from L.A. who live in Hawaii so I guess I can forgive them. The first time a survivor saw an image of his dead parent (Jack and his dad) the title of the episode was called White Rabbit. When Ben went looking for his dead mother again, he used a white rabbit to get through the sonic weapon fence. Coincidence?

What we know:
New questions (there's a lot of them):

Comments:
I can't believe you didn't think it was that great of an episode. It was maybe my favorite. I found it so horrifying that Ben killed everyone. That Richard didn't age. And the whole Jacob business still gives me chills. That was some freaky shit. FREAKY SHIT!

I should clarify, I loved the episode for the amount of backstory about the hostiles/others we got. It was awesome! And Ben is so much more evil than I thought. However from a storytelling perspective, the flashback didn't parallel anything to the current timeline story. A lot of early S.3 eps were like this. Also, how is Ben supposed to remember his own birth? Who was that a flashback for? Everyone there but the new born is now dead and dead men tell no tales (flashbacks).

I forget that you're so interested in "the business." The episode was definitely a bit of a departure. I can see how it's kind of like if Mark Twain decided to make Tom Sawyer more interesting in the middle by changing the font.