Heroes - End of Volume One 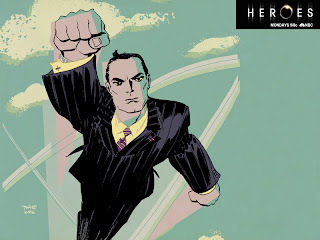 The final chapter of Volume One aired last night. If you don't want to be spoiled, then stop reading. It was awesome. Lots of stuff was resolved, new stuff was introduced, and questions remain unanswered. I was happy to see everyone gather together in Kirby plaza for the big show down between Peter and Syler. So the big question is where did the timeline diverge from the alternate future we kept seeing? And did the bomb really get stopped? From what we know of Hiro visit to the future, the bomb went off the next day after the election but the last episode only included events up to the night of the election. Also, it looks like Syler may in fact not be dead but hiding in the sewer. It is not clear if anyone is dead, in fact. Nathan could have taken Peter to the upper atmosphere and then flown to a minimum safe distance. Peter didn't necessarily explode, but just generate an explosion. He could have rengerated from it like he did in the alternate future. Matt the telepath was shot and taken in the ambulance. Although Syler flinging bullets at him wouldn't be nearly as bad as getting shot so he could pull through. DL was shot and didn't get attention for some time so his fate is much more dire.
In the end, we never learned what Nathan and Peter's mom's power was but we didn't find out Claire's dad's name is Noah. This is a strange thing to keep hidden but that piece of info was extremely satisfying. Niki seems to have taken on the powers of Jessica and perhaps put the second personality to rest for good. Hiro ended up back in time to meet the guy whose sword he stole from Linderman. If Kensei had powers it would explain why Linderman has the sword. And of course they set up the new big bad. Molly describes him as worse than Syler. When she tries to see him, he can see her. Scary.

Comments:
not sure... but I think the Mom of Peter/Nathan: her power is persuasion. I wonder if not every power manifests itself as a "visibile" or senses power.