LOST 3.03: The hatch blew off your underwear 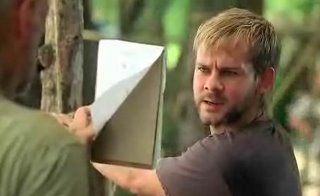 I have to rate last night's LOST a little lower on the scale of the last two. However, it was a great and necessary episode. For two weeks we've been seeing the work of The Others. We needed to be reminded that the odd stuff on the island is not their work. With the Locke episode we see what and odd place this is. Plus it was great to see Boone again. I liked him better with shorter hair. Here's what we've learned:

And here are new questions: