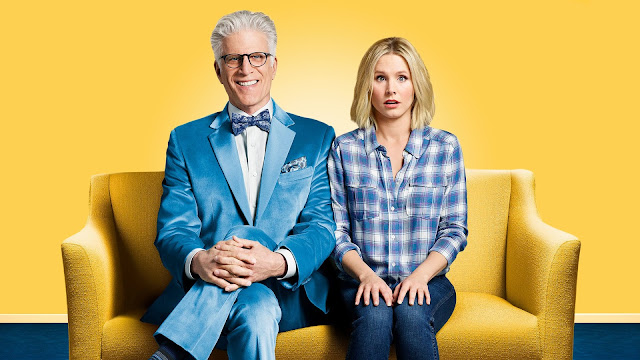 Last season was busy. I had intended to watch The Good Place but somehow just missed it. I love Kristen Bell and Ted Danson so I knew I would like it.

I didn't like it, I loved it. I watched the whole season last weekend. I can't remember laughing out loud so much to a TV show. Big spoilers below.

The Good Place is the afterlife where the best of the best spend eternity. Everyone else goes to the Bad Place. I had heard the twist somehow before watching the show. So I knew they were actually in the bad place. But I still didn't know the circumstances these people were there. My theory was this was the bad place for Michael and he had to try to keep the place together given a list of impossible situations. In the end, he had planned this place as a bad place to make the four main characters torture each other without realizing it. I'm glad there is a second season. It will be fun to watch it play out again as a mild reset.

Of course one of the best things about the show is Janet, the all knowing AI. When she died, I just about died myself. I watched it over and over. Also, her reboot sequence was also hilarious.

And there was Bad Janet who was even funnier. Adam Scott showing up as the head of the Bad Place was yet another wonderful thing. This show was hilarious. I will probably watch it all again over the summer.