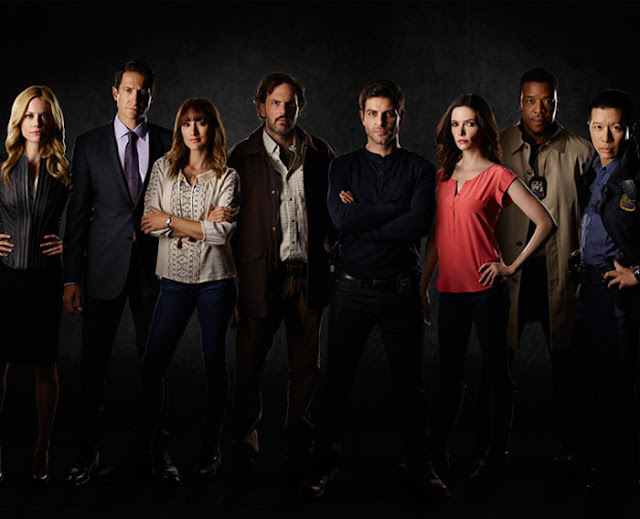 Grimm ended after six seasons last month. I once described it as an adult Buffy. Nick has his Scooby Gang and the Spice Shop is not unlike The Magic Box. At both places the gangs spend a lot of time looking through old books. On Grimm it's with 30 somethings instead of teenagers, thus adult Buffy.

Anyway, one of the things I liked about this show was the shifting of alliances.


In season five they finished with the mystery of the keys. They opened a box from the crusades and found a stick that had magical healing powers. I thought this was going to end up being a piece of the true cross. That would have made their story very similar to the recent season of Legends of Tomorrow. But it turned out to be a piece of Zerstörer's (aka Satan) Staff.

The season starts with Nick as a fugitive and Renard ordering him to be shot on sight. They resolve their differences after Nick impersonates Renard and says Nick was under cover and is a hero. Renard is also haunted by the sexy ghost of Miesner who helps him come back to the good side.

There was a wonderful light episode in the middle where the gang heads up to a resort for Monroe's birthday. They get spiked with a love potion that ends in death. Hank ends up falling in love with himself as he drinks the one meant for Rosalyn. She abstains as she is pregnant. It was a great one-off episode before the long predestined fight with Zerstörer at the end of the season.


In the end everyone dies expect Nick, Trubel and the kids. And by everyone, I mean everyone. Even the side characters at the police station. Luckily when Nick and Trubel finally defeat the Big Bad, Nick and the Staff gets sucked into a Mirror World portal which spits him out three days in the past where no one has died yet. So everyone gets to die and then everyone lives happily ever after.

Flash forward to 20 years in the future where everyone's kids are grown up and working together to defeat evil.