The New Fall Season is starting in just over a week. Here are the new shows that I'm going to be watching. 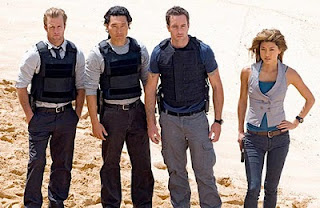 Hawaii Five-O
I'm most excited about this series reboot. The original lasted for 279 episodes. This is said to be a very contemporary version and not a remake. I don't remember much from the original except for the opening sequence. I like Hawaii and all of the actors especially Jean Smart. It is going to be great! CBS Monday 9/20

The Event
The creator has spent over four years developing the pilot and the overall arc of the series. He is also a huge fan of the great recent serials: LOST, 24, and Battlestar Galactica. Hopefully NBC won't fuck this up. They have never done a successful serial. They came close with Heroes but after the first season is totally deteriorated. I think by the end there were three differing reasons why people got powers. Having one producer with a vision that NBC seems to have bought into could lead to one great show. NBC Monday 9/20

Lone Star
Monday is going to be a busy night. Lone Star is about a con man working a long con on a family business and things get complicated. Really good buzz makes me want to watch this one. Fox Monday 9/20

Running Wild
GOB as a spoiled trust fund baby now living with his idealistic childhood sweetheart. From some of the people who worked on Arrested Development means it will be awesomely funny. Fox Tuesday 9/21

Raising Hope
The creator of My Name is Earl is back with a dysfunctional family raising a baby that showed up unexpectedly. If it's anything like Earl, it will be very funny. Fox Tuesday 9/21

Outsourced
NBC hasn't failed with a Thursday comedy in a long time so I don't think they will blow it this time. Here an American moves to India to run a call center with a much of misfit employees. NBC Thursday 9/23

Shit My Dad Says
They created a whole Twitter presence in preparation for this show. They had me at William Shatner. It's about time he did a sitcom. He was so funny on Boston Legal. CBS Thursday 9/23

These are shows I might be watching, I haven't decided yet.
Nikita
This started this week. I caught the pilot and it was OK. I just don't see any long term potential. How long can you spend taking down a corrupt agency? CW Tuesday

Chase
Looks good and I love a good chase show. It might just be a bit of Monday overload. NBC Monday 9/20

The Defenders
With Jerry O'Connell, this looks like the best of the new lawyer shows this fall. Plus it takes place in Las Vegas. CBS Wednesday 9/22

Body Of Proof
I love Dana Delany and I like the idea of a Quincy like medical examiner solving crimes. They don't have much faith in it by putting it on Friday. ABC Friday unknown

No Ordinary Family
I read recently that in addition to a weekly stand alone story, there is an complicated back story. I'm still deciding. ABC Tuesday 9/28

Comments:
When La Femme Nikita first came out in like 1992 or something it was one of my favorite films. It was kind of the first of the genre which has been copied either directly or indirectly many time and is probably responsible even for Alias.

What La Femme Nikita had though was an uncomfortable situational romance that was perfect. The film portrayed an emotion that's difficult to put into words.

I have not watched any of the Nikita related projects since (oh, I guess I did watch Alias, but that was indirectly related). Not because they might not be good, it's just that film holds a special place in my heart.