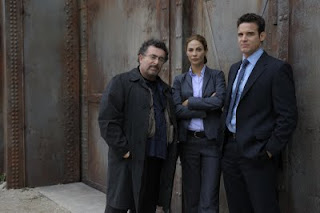 I've only been keeping up with three shows this summer:
I wasn't sure what to expect from Warehouse 13. The object-hunter type shows never seem to be successful. The concept of collecting magical objects seems to familiar and yet and can't think of other shows like it, other than Pandamonium. That's right, I just referenced an obscure Saturday morning cartoon from the early 80's. But this show is the perfect balance of comedy, sci-fi/fantasy, pop-culture references, and romantic tension. But this show has the main success elements: interesting characters. Pete and Myka are a great team who quickly got over the we-hate-each-other to we-are-friends-and-colleagues mode. Artie (a long time SciFi actor) has an interesting a mysterious past but is completely dedicated to the Warehouse and the safety of everyone. The addition of teen-genius Claudia was the best. She improves better than Artie, sometimes with disastrous results.

So each week Pete and Myka venture out to some part of the country to collect a dangerous object. Mostly it has something to do with electromagnetism. Sometime it is technology created way before it's time, like a holographic generator. When something strange happens they try to find a common source and then bag it, tag it, and stick it in the warehouse.

The show has three episodes left in this season, but all the current season are on Hulu. It has already been renewed for a second season. Yay!

Comments:
Alias was kind of an object hunter show sometimes. And in a way the X-Files and Lost are "concept hunter" shows.