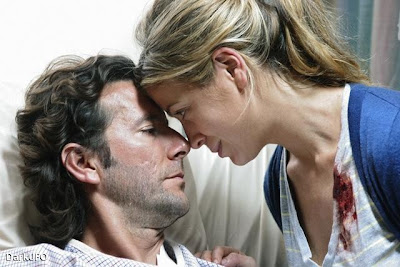 I'm trying to get back into my blogging mode, starting with the last episode of LOST. I watched "The Variable" again last night. It has lots of answers, lots of action, and of course lots of more questions. Also I have some new theories about how time travel works on the island. I think that The Others who have some sort of communion with the island are not allowed to change time. In fact they are caretakers of time. This is evidenced with Eloise's interaction with Desmond in the 90's. Also she and Widmore sent there son to the island to be killed. Or if he is not dead yet, then at least shot and hurt badly. However non-others can alter the course of history, as long as it isn't involving an Other. Daniel met with Desmond and he didn't remember it when he first met Daniel. That's because Daniel hadn't done it yet. However it gets tricky because it should have propagated during their respective timelines. Daniel altered the past within a day of Ben turning the Frozen Donkey Wheel. So Desmond should have had the memory arrive in his brain during the week he and the Oceanic Six were on The Searcher, not three years later while he is living on the sailboat. Maybe Daniel realized this somehow and that's why he changed his mind about changing the past. Alternatively, Daniel may have realized that the past can't be changed and he needs to be a part of it. He told everyone what they needed to head in order to get them to do the things they had to do. He did mention that he was getting Chang to do what he needed to do and that's why he spilled the beans about him and Miles. And Jack and Kate have their role to play. The only way to motivate Jack is by making him think he can restructure his last three years. Only he would have motivation to do so. Everyone else kinda has a better like because of the crash. Except for the dead people. And if Daniel really thinks he can change the past, why would he talk to young Charlotte when he promised himself he never would?

So here's what we learned:
And the new questions:
Episode 15 is tonight with the 2 hour season finale next week. Also, the title of this entry is not only a quote from Jack, it's kinda my life right now.