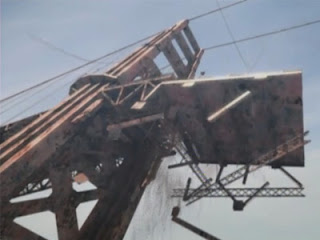 My favorite non-fiction show right now is Life After People on the History Channel. This was based on an award winning special from last year. Unlike some reality shows, this is truly a docu-series. Each week they pick a vague topic and one or two cities to follow into a future of life on the planet if all the people just vanished or died out at the same time. Last night the topic was historical icons and the city was San Francisco. We got to see computer simulations of cable cars crashing down the hills after their cables snapped, the Golden Gate bridge rusting and falling into the bay, ships breaking loose from their moorings and sinking, and sections of the Bay Bridge getting overgrown with vegetation and becoming new peninsulas over time.

Secondly they conjectured how long it would take for light and air to penetrate the case for the Declaration of Independence and the Mona Lisa. Nearby a fully cracked Liberty Bell would be swallowed by the new forest. In Paris, Notre Dame would be the last structure standing in the city. And eventually the jungle would reclaim the Petronas Towers in Kuala Lumpur.

The other great thing they do each episode is visit a place in the world that has been abandoned for many years. In the original movie, they went to the towns abandoned after Chernobyl. Last night they went to a town in Pennsylvania that had to be abandoned because of an underground coal mine fire that was dumping toxic fumes into the town. The government bought up the town in the 80's an now there is little evidence left that there was a town there.

Please add this to your TiVo or DVR. It is a fascinating show. Next week we get to see Las Vegas get buried by the desert.

Comments:
I added it. Now that the season has ended I don't have much to watch.