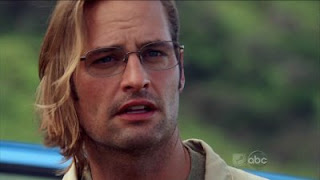 We are halfway through the season already. A lot of people were talking about how LOST has returned to it's flashback/flashforward format in episode 4.08. I disagree that this was a return to that format. It sure looked like it but the big questions would have to be: which was the current time and which was the flashback/flashforward? I don't think there is an answer to that. The events in 1974 were concurrent with the experiences of the time travelling group and the events of 1977 were concurrent with the Oceanic Six group. Neither was a flashback nor a flashforward. I think of this episode as a "bridge" episode to bring the timelimes together. The start of the season reset the timeline of the Oceanic Six group to 2008 and there were some minor teaser flashbacks to 2005 (or possibly later for Desmond). So this had a unique format and not a flashback afterall. Here's how this season's formats played out.

5.01 - Unrelated flashback to open the season: Daniel in Dharma land.
5.02-5.04 - Teaser flashbacks to 2005: just a quick scene to open the episode.
5.05 - No flashback, gasp! Is this the only one?
5.06-5.07 - Wraparound flashforwards: the episode opened and closed with flashforwards to the near future back on the island.
5.08 - Bridge episode: neither timeframe was a flashback or flashforward, although it really seemed like one.