Do you trust me? 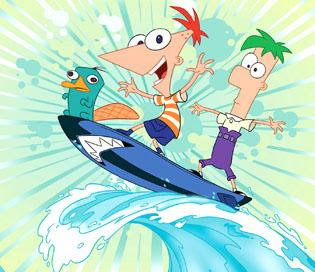 Well if you trust me you should put Phineas and Ferb on your TiVo or DVR or whatever. Why? It's very funny and smartly written. It's also the best cartoon to come along since SpongeBob SquarePants. I've only seen about a half a dozen episodes but I've had a big laugh in each episode.

What's it about? Phineas and Ferb are two step-brothers and best friends who are making the most of every day of every day of their summer vacation. They also have the ability to build huge and amazing things in a short time such as teleporters, time machines, or an enormous and amazing mini-golf course. The antigonist to their fun is their older sister Candace (voice of Ashley Tisdale) who is always trying to bust them for doing stuff. But whatever they build gets moved, destroyed, or shrunk before mom and dad get around to seeing their shenanigans.

The other thing you should know is they have a pet, Perry the Platipus, who is a secret agent. His one goal each week is to stop the evil Dr. Doofenshmirtz. The boys know nothing of his secret life or his headquarters under the house. Luckily while foiling the evil plan, Perry manages to destroy the evidence of whatever Phineas and Ferb are doing. Plus they have a lot of random songs. Trust me, it's very funny.