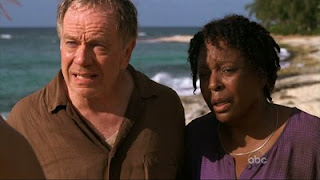 LOST is back baby! Season five started up with two episodes two weeks ago. I was out of two for this and the following third episode last week. LOST has a great way of ending each season with what I call a "Game Changer" season finale. Season 4 ended with the island moving and the Oceanic Six getting home. Now season five is no longer about trying to get off the island or escaping from the Others. It is about getting back to the island and surviving the time shifts. I love the new season.

I love the new format. This season they've dropped the regular flashbacks and now just shift between the two groups of survivors. But they didn't get rid of the flashbacks all together. At the start of each episode they have a single flashback scene. In the first we see a Dharma flashback to the frozen donkey wheel, then Hurley's flashback of the Lie planning on Penny's boat, and then Desmond's flashback of the birth of his son Charlie.

The love the gathering that is taking place off the island. As the last season ended Ben and Sayid had come to L.A. where Jack, Kate, and Hurley already lived. Then Sun arrived and met up with Kate. Now Desmond and Penny are now on their way seeking Daniel's mother. So all the major players will be in the same place as early as episode 5.04.

I love the explanations and revelations already given so far. Locke told Richard when he would be born and Widmore was on the island in the 50's. The complete story is starting to come into focus.

I love the adventure of the survivors through time. It's kind of the excitement from the first season where suddenly they have no idea where they are anymore. In a sense they are LOST again.