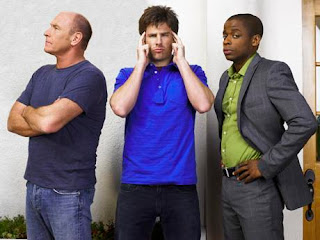 I've been watching shows in batches recently. I'm still a bit behind after all the new shows that were on while I was on vacation. Over the weekend I watched Fridge. Why only four episodes? This week while recovering from my nasty foot injury, I watched all the Psyche episodes in the recent block. I missed one which I'll have to watch on Hulu. I had the TiVo set for only 5 episodes.

The season finale had Shawn, Gus, and the Santa Barbara police department chasing after the notorious Ying-Yang serial killer. I'm not a fan of serial killer shows. I think there are about 10 times more on TV in any given year than in real life. Probably lots more. And there were big problems with the one on Psych, but at least they had fun with it. No real killer would leave such elaborate clues. The second clue was spelled out with Alpha-Bits making the Ying-Yang Killer the true Cereal Killer. Cute. I still don't approve of serial killer storylines in any show.

Psych is still a great show. There's always some crazy murder to solve and only Shawn with his unique skills of observation can take down the killer each week. Too bad The Mentalist is such a blatant rip-off and it is pulling in high ratings from the geriatric audiences to keep it around. Psych is off until summer when it starts its fourth season.