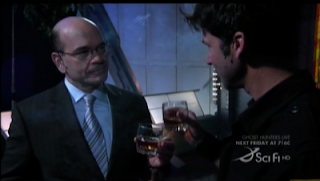 Last night SGA had bottle episode. A bottle episode is one episode of the season that is produced for with the absolute minimal amount of money. Very few special effects, no special guest stars, and no location shoots. This is often done as a clip show. Most shows, I'm looking at you Star Trek, do them in lame or cheesy ways. For some reason Stargate: SG1 did them very well and now so does Stargate: Atlantis. The format for the clips this time was a trial of the Atlantis team for crimes against the people of the Pegasus Galaxy by a new coalition that has recently formed. Rarely do clip shows have significant character development, but this one did. Mr. Woosley, the current head of the Atlantis Expedition and the Emergency Medical Hologram, got to mount a defense for the Atlantis team. Not only did we get to see him use his high powered attorney roots, he also adeptly maneuvered the politics of this new council and Atlantis come out ahead in the end. We see now how the wormy civilian bureaucrat became the head of an intergalactic scientific and military expedition.

And the end of the episode Mr. Woosley and Col. Shepard shared a glass of Scotch and a cigar on the balcony of the control tower and just like the end of every episode of the current best courtroom show, Boston Legal. And of course Mr. Woosley and Denny Crane each have origins in Star Trek so there are even more parallels. I give the episode high marks.