Hi, My Name Is Chuck 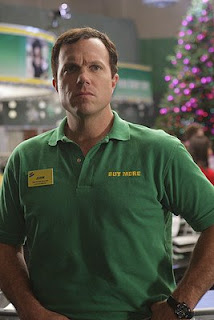 Somehow Monday night became the best night for television. Every network has great stuff. NBC has three hours of goodness, starting with Chuck. Chuck is the funniest spy show ever. The biggest issue I have is not all the crazy technology and gadgets, it's the fall-in-your-lap nature of a lot of the cases. Just like Murder, She Wrote and Knight Rider, the cases often come to Chuck. I mean really, how often to international terrorist walk into a Burbank electronics store? The unexpected thing about the show is the huge amount of great side characters. There's the best friend, the sister, Captain Awesome, Big Mike, the Asian chick, the Indian guy who was the assistant manager for a few episodes, and the crazy guy who was a Missile Command champion. Of course Agent Sarah and Major Casey are the other main characters. Major Casey is very hot.

Tonight had a really great joke. The mathematical solution to unlock the missile codes was encoded into a RUSH song.

Chuck: Morgan, do we have any RUSH CDs in the store?
Morgan: No, but I've got them on my Zune.
Chuck: You have a Zune?
Morgan: Of course not, they're on my iPod