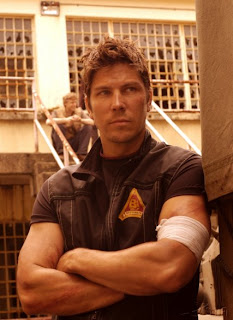 We may have to wait until some undisclosed date in 2009 to see the final 10 episodes of BSG, but at least it won’t be the very end. SciFi just announced an additional two hour movie to air after the final season. Early reports show it will be a Cylon story taking place before the event of the mini-series. Perhaps it will give clues as to the retreat of the final five.

The mid-season finale was fantastic. Most expected the fleet to find Earth in the last episode of the series. They blew away conventional wisdom and found it with a half season to go. Better yet, they settled into a truce with one of the Cylon factions and they all landed together. Of course it wouldn’t be Battlestar Galactica if they landed on the White House lawn to a mix of greetings from the Earthlings. No the planet was dead and they stood across from a ruined city with bridge which is likely supposed to be the Brooklyn Bridge.

So where and when exactly are they? They could be in the past. The fleet and the Cylons then repopulate the planet which would create the modern society. They could be in a parallel universe. That would be simple as they can do what ever they want without having to resolve any conflicts with out current society. They could be in the present. A rogue Cylon faction beat them there and blew us all up before they arrived. Or they could be in the future. I think this is true, but not just that they are in the future, but the distant future. The original Earthlings left and colonized Kobol. Then they left Kobol and built the 12 Colonies and the 13th went back to Earth. Somewhere along the way they forgot that is where they came from originally.