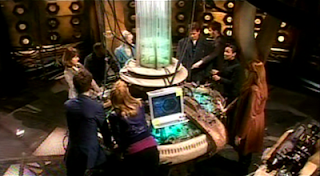 Last week we saw the end of season four of the new Doctor Who. The season was great but the two part finale was fantastic. It rolled up all the unresolved stories from the first four seasons and tied them up in a great story. All the companions from the new series came together to fight the Daleks, again. The season finales of the first three seasons concluded with a Buffy-style cliffhanger. That is when all the mysteries of the current season and episode are finished and then there's a somewhat disassociated event which sets up the next season. At the end of season four, the Doctor flew off into space alone. This could have been the end of the modern series but it has been indeed renewed. David Tennant, the current Doctor, is booked to play Hamlet on stage in London so the next season will be shortened, just four episodes. He has signed up for a full season after that but we have to wait for 2010 for that one.

I'm sad to see Donna Noble go. At least she didn't die like it was somewhat foretold. I hate when characters dies. After saving the Universe by absorbing the essence of the Doctor, she had to have her memory wiped or she would surely die. I was hoping that the man she fell in love with while living inside the Library's hard drive, would somehow find his way to her. Alas, that was not to be. But the greatest love story did get to play out. The Doctor/Donna hybrid clone Timelord version of the Doctor was able to proclaim his love for Rose and stay with her in the parallel world.

Even though the finale didn't set up the next season of Doctor Who, there was some clues as to the next season of Torchwood. That show's third season will be a disappointing five episodes next spring. With Owen and Toshiko killed off in the finale episode, the big question was who is going to replace them. Dr. Martha Jones would is a clear choice. She appeared in three episodes last season. But I really hope the fifth cast member is Mickey Smith. He and Jack have a great frenemy relationship and after working with the Doctor, he is clearing capable of working with Torchwood. He would be a great addition. I just hope Jack and Ianto make out more.