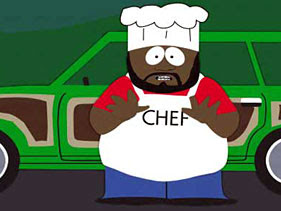 Isaac Hayes passed away over the weekend. He was the voice of Chef on South Park. His character showed up less and less until Hayes left the show publicly over the whole Scientology episode. They repurposed his old voice recordings for the "Return of Chef" and turned the character into a brainwashed child molester, then killing him and turning into Darth Chef. Now he's gone for good. RIP, Chef.