How Clean Is Your House? 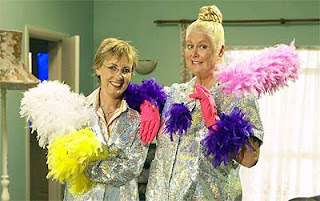 Kim and Aggie put on their feathered rubber cleaning gloves and get these homes clean. The direct the residents to remove their clutter. Usually there's a huge pile of rubbish bags in the street at the end. Then they would bring in an industrial cleaning crew to take on the carpet, floors, and walls. In addition they show the residents how to keep things clean. And they send out the dust and dirt to the lab to see what creepy-crawlies are infesting their home. That usually motivates the targets to keep things clean. Finally, they check up on them a few weeks later to see how they been keeping up on things.

If you have BBC America, put this on your TiVo. However, like a lot of shows like this (such as Queer Eye), the formula gets a little boring after a while.

Labels: BBC America, How Clean Is Your House

Comments:
OK, the months worth of fags joke had me LOLing for a minute. That's so funny.

But speaking of fags, I was expecting a Lost post!