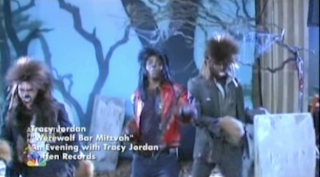 I just rewatched the second episode of 30 Rock's season 2. This is the one wear Jack battles with GOB to look good in front of Don Geiss. Geiss is the CEO of The Sheinhardt Wig Company which owns GE which in turn owns NBC. Of course that is only in the absurd reality of the 30 Rock universe. In reality, Jeffrey Immelt is the CEO of GE which is the second largest company in the world. It owns an 80% share of NBC Universal which runs the various television networks, studios, and themeparks associated with the brand. But this absurdity is one of the reason 30 Rock is the best sitcom on TV right now. The hilarious cut away jokes are also great. In this episode Tracy flashed back to his hit party song, Werewolf Bar Mitzvah. "Werewolf Bar Mitzvah, spooky, scary. Boys becoming men, men becoming wolves." 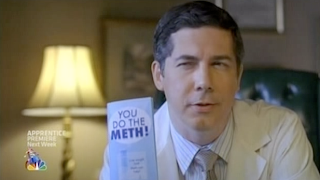 I also love whenever Dr. Spaceman shows up. This time not only did he try to get Jenna to go on Crystal Meth to loose weight, he also showed off some of his celebrity clients which include, ALF, the unibomber, and John Ashcroft.

Comments:
"How important is tooth retention to you?"

I didn't catch the celebrities on the card - thanks for pointing them out. Hilarious.