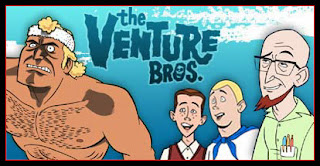 Stop what you are doing right now and put The Venture Brother’s on your TiVo. Then come back and read the rest of this post to understand why you should watch this show.

Ok, now that you are back let me continue. About a month ago I was having lunch with my friend Sean and he told me I needed to watch this show. Since both seasons are on DVD I put them on my Netflix queue and bumped disk 1 to the top. I watched a few episodes on the plane ride back from DC and was pleasantly entertained. However when I got to the yard sale episode, I was hooked. This episode is on tonight so don’t miss it.

The Venture Brothers is about two boy adventurers, their super scientist father and his bodyguard. It is a spoof of Johnny Quest but much more adult. Dr. Venture was himself a boy adventurer but is not a very good super scientist unlike his deceased father who was the true renaissance scientist. Dr. Venture also has an arch nemesis called The Monarch who is always out to destroy him. He’s got a trust fund he can afford to be an arch villain. Arch nemeses and henchmen are so common they use the verbs “arching” and “henching” to refer to them.

The yard sale episodes, called “Tag Sale, Your It” is the best episode of the first season. Dr. Venture is not very good so he has to do silly things to supplement his income. He’s not made of experimental jet fuel. In an earlier episode he rents out a wing of the Venture Compound to Orpheus who becomes a regular character. Here to raise more money he decides to sell off some of his dad’s old gadgets. Of course all the super villains show up to buy stuff. With so much costumed villainy and the absurdity of haggling over the cost of a shrink ray gun, this is a perfect episode. Don’t miss it.

Comments:
OMG! I love this show also! Yes, I have to agree that Tag Sale, You're It! is one of the funniest episodes. It juxtaposes the fantastic with the mundane. Wait until you see the season two finale.