Who Wants to Be a Superhero? 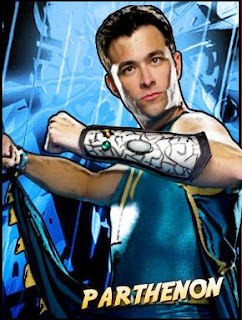 We are several episodes in to Season 2 of WW2BaSH? and it's already better than last season. Stan Lee got rid of the bad super heroes early and now I have the problem of liking everyone who is left. I don't want anyone to be kicked off now. I'll list my favorites in order. And by favorites I mean everyone left.
Parthenon - he's the superhero who happens top be gay. His powers come from an ancient arm thinging he found on an archaeological dig. He's the one pictured.
The Defuser - he's the superhero I want to be gay. He's a hunky cop by day and in his spare time also fights crime as a gadget hero who uses non-lethal force to stop the villains. Whip Snap - she has the mastery of the whip and can turn people to sand. In real life Paula has had a hard life and she makes me want to cry whenever she talks about it. She's a skinny black lesbian with no family and few friends. Hopefully she doesn't leave the superhero lair the same way.
Hygena - she fights crime and grime with modified cleaning utensils. I was reading about her on wikipedia and she said she came up with the idea for this superhero while attending comic conventions with her husband. She is quoted as saying, "that to properly combat the odor problem on the convention floor would probably require some sort of superhero." It sounds like the Lego conventions I've been to.
Hyper-strike - he's got super strength can shoot lightening from his hands or something. He is kind of sexy although I liked his parachute pants of his first costume more than the tights he got during his make-over
# posted by Daniel Brown @ 5:29 PM