Rick and Steve: The Happiest Gay Couple in All the World 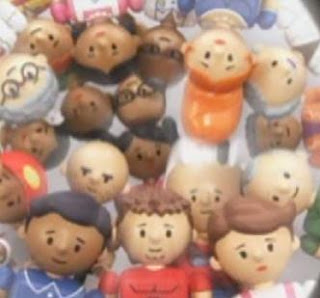 Season 1 of Rick and Steve concluded this week on LOGO. Also the entire first season was released on DVD this week. There are only 6 episodes in the season. I really hope we get a second season. If you don't want to wait for the DVDs to arrive or you just don't like to keep DVDs around your house anymore, you get them on iTunes as well. This series is based on a series of short films Q. Allan Brocka made out of Lego bricks and Minifigs. These made the film festival rounds but are not available online, thanks to the Lego Group's lawyers. So this new series is done with computer animation and instead of Lego. The people look kinda like Playmobile toys but not too much. The first season had much of the same stories from the shorts. Rick agrees to father a baby for his lesbian friends. Steve's Southern parents visit. Rick and Steve have a three-way that ends badly. Dana gets pregnant instead of Kristen. Plus there are some great new stories. The group goes on a gay cruise. Pussy tries to take out Dana. Steve joins the Log Cabin Republicans. Rick takes steroids to buff up. It's very funny so don't miss it.

My favorite recurring joke the the rrrrrroses lady. For anyone who has spent anytime in West Hollywood, the strange Latina women selling roses at outdoor cafes and bars is very familiar. I can't believe no one incorporated her into a movie or show before now. She even shows up in the delivery room during the season climax. I love her.
# posted by Daniel Brown @ 2:07 PM