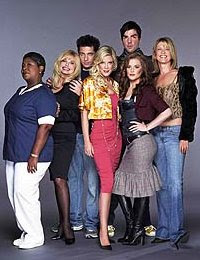 VH1 tends to steer toward celebrity based gossip and reality shows. But occasionally they run shows which defy their standard model, a scripted original comedy show. This first started with So NoTORIous, a show so funny I'm amazed it wasn't picked up by NBC who originally ordered the pilot. Tori Spelling, Loni Anderson, and Syler where all fantastic. But it was cancelled and then her dad died, poor thing. I have it on DVD.

Then earlier this year, VH1 created a complete original take on the skit comedy show, Acceptable.TV. Five mini shows where shown each week and the audience would vote on what they wanted to see more of. Operation: Kitten Calender was a brilliant spoof of the Apprentice. I would love to see more. No news if this is coming back for a second season, but I wouldn't hold my breath.

Last week they started another new show, I Hate My 30's. If you haven't watched it, you should add it to your TiVo right now. RIGHT NOW! Ted should click here. This show has a great variety of thirty-something characters, including the bitter divorced guy, aging cheerleader, dad trying to hold onto his youth by dressing too young, and ambitious woman who doesn't want to date right now. The narrator is the guy who own the coffee shop everyone goes to, Dr. Rod. I'm not sure if he's really a doctor, but now a runs a coffee shop. Switching careers is so thirties.

Here's an extended preview of this week's episode. The scene is a spoof of Summer Nights from Greese.