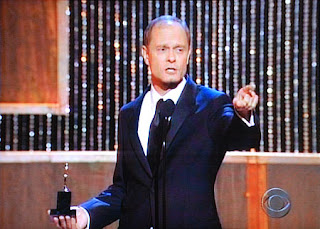 Last night while I was traveling back from Hawaii, the Tony Awards were aired on CBS. Readers of DtvB know that I hate, hate, hate award shows. I never watch them. I don't go to Oscar parties. I don't TiVo them. There is one exception and that's the Tony Awards. I could care less about the winner of the lesser categories or listening to the speeches, but I love watching the performances by the new casts. It's not like television or movies where I could watch the nominees at any time. With Broadway I don't have the opportunity to watch all the nominees so I now always TiVo the show. I haven't watched it all yet but I did get to see gay Justin from Ugly Betty interact with the cast from of Mary Poppins.

I was also very happy to see newly out Niles win for lead actor in Curtains. I had never heard of it. He thanked his partner which was great. Gay people make the world a better place.
# posted by Daniel Brown @ 10:34 PM

Comments:
I don't know much about theater or broadway or whatever the broad category is, but what I do know is that the voices of the cast members are often amazing. Whenever a broadway person is singing on a show, I will listen. I skip over the pop singers because they either lip-sync or just sound the same anyway. But the broadway people have such great voices. Listening to them often gives me chills.

I loved the "all broadway" episode of The View. I guess that won't be happening anymore.