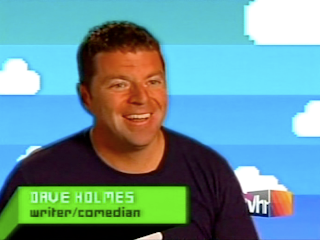 I was watching the 100 Greatest Songs of the '80s on VH1 this weekend (btw, the greatest song was Livin' on a Prayer by Bon Jovi) and I noticed this guy doing some of the commentary who I didn't recognize. He turned out to be Dave Holmes. I thought he was hot so I Googled him. He gained mild celebrity status in the 90's for a show called Wanna be a VJ on MTV. Also he was born 32 days after me and he is gay. I think he is super hot, although he's probably like 5'6" so it would never work out. Dave, if you read this, call me. :-)

Comments:
I saw this line in his wikipedia bio:

Holmes is at the moment involved with longtime friend and lover Kit Wapner.

Um, "longtime friend"? It looks like his wikipedia entry is stuck in the 80s as well? Actually, just about everything about that sentence is just weird: "at the moment", "involved with", "lover", "Kit Wapner".

Hey Daniel, I'm going to the store with my lover at the moment. You know, Kat Depner? He's also my long time friend. And the lover part's long time too. That's why I say "at the moment", to indicate the eternal ongoingness of our relationship.

It has been nice communicating with you.

I found your picture when searching for pics of Dave Holmes. He's due to be on my radio show tonight, if you wanna listen. You can hear it on the internet. http://www.blogtalkradio.com/ernestradionetwork/2010/12/17/episode-30--holmes