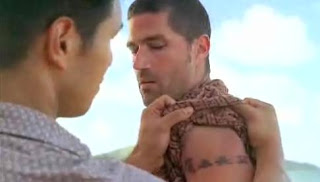 Comments:
Yes, before I even read the whole post I was preparing to congratulate you on the title. Very nice.

Now, on to business. Jack is so lame. I'm thinking that at some point in the series Jack, Sawyer, and Kate are all going to be taken to task for their power issues. Nobody ever suggests a course of action, they start off at anger and then move quickly to proclamations. Case in point Kate says, "I'm going back for Jack and you can't stop me!" Not only would that be a stupid poorly planned course of action, what's so wrong with, "I'm feeling a bit guilty about leaving Jack, or maybe I just miss him, but do you think we should head back and get him?"

No, just start screaming things out. I would have let the bitch go and hope she died in the process. Good riddance!

Now, back to Jack. What's up with the "tattoo rape" scene? Not only was it slightly disturbing, but even more so because it didn't make sense. She does tattoos, but doesn't want to tattoo him, so he forces her? For what? A tattoo? He certainly didn't understand the significance, if any, the tattoo would have. Nor do we. And it's not that profound.

Now, back to JJ Abrams. Unfortunately, Lost is turning out to be a lot like Alias. Each episode may be good, but even though they say they have a plan, it feels like they're just winging it. Do you think we're ever going to find out why Charlie was hanged and not killed? Maybe, but I doubt it. It's sloppy righting. Lost is no longer a brilliant show. It's just entertainment. Set your expectations on low.

Oops, righting == writing. The significance of that mistake is probably more interesting than anything in a Lost script.

I'm astonished that neither of you mentioned that Diana "WHY DID YOU ADOPT ME" Scarwid from "Mommy Dearest" & "Party Monster" was The Sheriff.

Hand back your gay cards now!

Also, what was the significance of the mark Juliet received?

I thought she looked familiar but her credit is not listed in IMDB. I guess I'm not one of her FANS.

I can't believe I spent 5 seconds wondering why you capitalized "FANS" in your post!
Now I'm ROFLMAO & my co-workers are looking at me like I should be in the psych ward (giving Hurley & Libby some company).
Love ya Daniel!