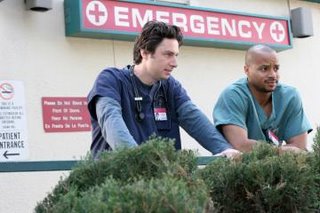 Scrubs returns for a sixth season tonight. The Season five finale ended with Carla, Jordan, and JD's ex-girlfriend all becoming pregnant. It starts at 9:00 on NBC. This used to be the best time slot of the week. Cheers and Seinfeld used to be on then. Now it's considered one of the worst since it is up against CSI:CSI and Grey's Anatomy. I don't know why people don't like comedies as much as they used to. I blame Donald Trump for the ruin of Must See TV. He wanted the best time slot for The Apprentice. This was the lowest ratings for NBC Thursday since Cosby made it big.

I've been watching lots of Scrubs lately. It's on twice a day on Comedy Central so my TiVo gets filled with lots of old episodes. I love watching a show in a compressed time frame. The recurring jokes are much more obvious, like Dr. Mickhead and the Colonel Doctor.