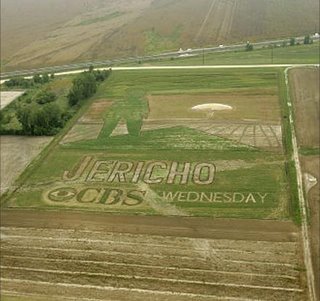 Jericho episode 8 is on tonight at 8. While it's no LOST or Heroes, I've enjoyed this new CBS show. I've had a few problems with it, however. For one, why did it seem like the entire country disappear after only a dozen or so nukes fell? Why did the entire satelite television system go dark, especially since we just found out New York made it? If Seattle got nuked, it's likely Redmond and MSFT would suvive and they could broadcast up MSNBC. Of course my biggest problem is that it is starting to look to real and it's scaring me. Tonight is supposed to be the most real as the mayor's son rush to another town to get some antibiotics and get to see the chaos and destruction first hand. I'm also sick of Mayor Dad. He's annoying and incompetant.

For more escapist television, LOST 3.06 is on right after. Savor this episode because we won't get another episode until 02/07/07. Kate is supposed to choose between Jack and Sawyer. It's obviously going to be Sawyer since she hasn't seen Jack since the Palla Ferry. Or at least Jack hasn't seen her since then. I've learned that they hadn't originally planned to kill of Mr. Eko, but he was hard to work with and wanted out of his contract so it worked out well for everyone. We've got five new characters this season anyway. He lasted longer than Boone.