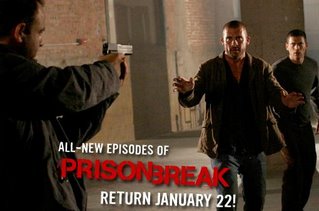 When did Fall Finale become an established term? I think it was last year with Prison Break. They took a big 5 month break after their strong fall opening. Last night was their last episode until January, less than a 2 month break this year. We did get to see 13 episodes before the break. LOST only gave us six. That was the wrong thing to do, we should have gotten 8. One third of the season is much better than only a quarter. There's not much of the story that can unfold in only 6 episodes. Tomorrow is the Jericho Fall Finale and next Monday is the Heroes Fall Finale.