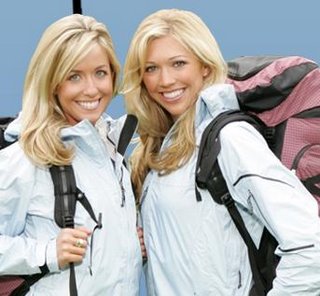 No I'm not talking about some fetish, it's The Amazing Race. A few seasons back they started having these extra long legs which get broken into two episodes. This makes for a great dramatic "To Be Continued..." The exhausted team thinks they are done but then has to start over again with new Road Blocks and Detours. This time Phil didn't meet them to give them the bad news. He was probably still stuck in Madagascar since everyone else jumped on the early flight.

I used to hold the Barbi team (pictured) as my least favorite. They do lots of jerky stuff to other teams. But last night the 'Bama team cut in front of the cab line without permission. Doing jerky stuff to innocent bystanders is not acceptable. They need to go! The Cho's are now my team of choice.