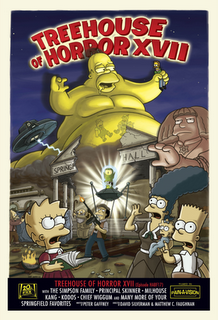 I just got back from voting. I think next year I'll switch to absentee. My poling place is sketchy. The Simpsons had a harsh political commentary on their Halloween episode on Sunday. Ten years ago they did one of my favorite episodes with Kang and Kodos impersonating President Clinton and Senator Dole. "It makes no difference which one of us you vote for. Either way, your planet is doomed. DOOMED!" That was nonpartisaned and funny. This year Kang and Kodos invaded Earth and were still there three years later. Kang was upset they weren't greeted as liberators. The episode ended with random explosions going off in a vacant Springfield. Quite scary.

For tonight's election night results I suggest the live broadcast of The Daily Show and Colbert Report. It's live on the East Coast and once again we here on the West Coast get screwed. But at least we get the Oscar's early. If you missed last night's Daily Show, they reran the School House Rock parody explaining the mid-term elections they first ran four years ago. Here it is on YouTube: http://www.youtube.com/watch?v=1FcZJqqA2AI

Comments:
I loved this episode, especilly the Aliens still having the hearts and minds of the people...tehehehe
I have enjoyed the Simpsons this season a lot. Hey, I also didn't know Springfield had a little Bangkok!