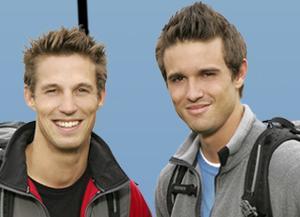 It's Season 10 for the "Race" and it seems more and more likely that the non-elimination rounds are picked by who they don't want eliminated from the race. Last year every non-elimination was to the advantage of the Hippie Team who eventually won. This year both times the supposed predetermined non-elimination happened when the Coal Miner and wife came in last. This seems a little too coinicidental. I'm starting to get suspicious. Anyway, here's what I think of the remaining teams:

David and Mary: The Coal-Miner and wife team who seems to get all the advantages. Of course they are the nicest team and kind of deserve the breaks so if they win I won't complain like I did when the stupid hippies won last year.
Dustin and Candice: The beauty queens. They are the villians this year. I don't like them and want them to loose.
Erwin and Goodwin: The asian body building brothers. Also a goodie-goodie team who I wouldn't mind see winning.
Lyn and Karlyn: The black mothers. I've grown weary of them.
Rob and Kimberly: The dating couple with serious anger management issues. They are entertaining and haven't done anything to earn my hatred. I'd be happy to see them get the prize.
Tyler and James: The hot models and recovering drug addicts. Yes we know it's hard to be beautiful, so shut up and go home.

Comments:
Tell us more about the men in the photo. What is their story, where did they come from, what do they have for breakfast, when they read your blog do they write nice comments?