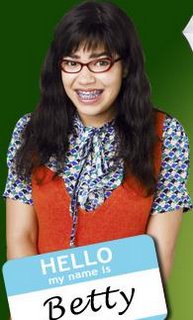 So in my post a couple weeks back I listed Ugly Betty as one of the shows I was not watching. This was mostly because it was on the same time slot at Earl and Survivor and I only have two TiVos. I actually have one TiVo and a fake DISH network TiVo-type device. So last night I was over at my friend Larry's who has a party every Thursday night and we watched the premier episode and it was fabulous. Betty is great and her boss is hot! The show is so over-the-top campy. It is going to be a huge hit amoung gay people. If you are gay, you need to watch this show. There are also two gay characters on the show, although they haven't specifically called them out as gay yet. One is the assisstant to the evil rival to Betty's boss played by Vanessa Williams. The other is her nephew, although he's only 12, he is obviously gay. The sets are wonderfully outrageous as well.

The show has two O.C. alumns, Caleb who died last season, and the evil Dean who was having an affair with Taylor. Ugly Betty is based on a very popular Telenovela. I love that they kept her Latina. You can watch the full episode online right now: http://dynamic.abc.go.com/streaming/landing