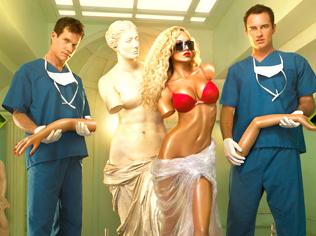 Season 4 of Nip/Tuck starts tonight on FX. There was no real season finale like last year. The storyline was wrapped up. Here's what happened. Christian and Julian continued to battle with "the Carver," a serial rapist/torturer who has attacked both Christian and Julian in the 2nd season. The Carver kidnap Christian's fiance on their wedding day and reversed all of her surgeries. Very gross. They ultimately figured out the Carver was actually two people, both close to them. One was their bisexual surgeon employee Quentin and the other was his sister Kit who was the detective investigating the case. I think the better solution would have been Julian's unknown rapist father. Quentin and Kit got away and fled to some sunny Mediterranean city. Meanwhile, Matt the teenage was taken prisoner by his crazy ex's racist father and almost killed. He and his tranny friend broke free an killed him, burying him in the grave he made them dig for themselves. It was kind of a crazy season. I wonder what this season has in store. I'm sure I'll be watching the horrible surgury scenes with my eyes covered.