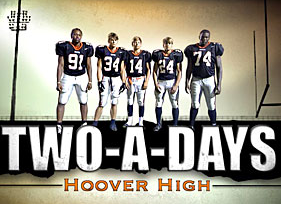 I started watching the new MTV reality show today called Two-a-Days. It's about a high school football team in a small Alabama town where football is everything. If you don't show up to practice, you better not be able to walk. You have to give it your all. If you can walk off the field instead of crawl, you didn't work hard enough. The first episode was about a game between Hoover (the team on the show) and this team from Nease, FL. Apparently the game was on ESPN last year as these were two of the highest ranked teams in the country. Hoover won of course. I was wondering if they had footage of both teams and they only used the winning team to make the show about.

The main guy in the show is Alex whose girl drama over shadowed his big win over Nease. Then there's Max who got hurt and is playing safer since his surgery much to the coaches displeasure. Both these guys have the same bad hair style I had in high school. I can't believe it came back. I also liked the fact that they showcased Tyler who dropped off the team because the coach is too demanding. His brother was a star and now plays football for Auburn. I'm expecting this kid to come out of the closet show.