Stargate: SG1 has been cancelled 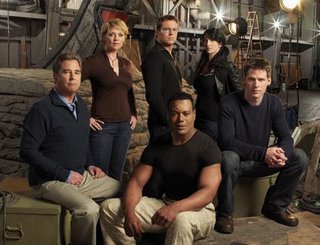 Sometimes things happen that make no sense I just don't believe they can be true. Thus is the case with the recent news that the SciFi channel has cancelled its longest running show, Stargate: SG1 after 6 season (10 if you add in the 4 from Showtime). Ratings have slipped from last year, most likely since the moved BSG to the fall instead of keeping it paired with SG in the summer. The timing of the announcement makes little sense. Last Friday the show just celebrated it's milestone 200th episode. The franchise has been called the "Star Trek" of this decade. There have been rumors of a second spin-off. A couple days ago it was announced the episodes will be available on iTunes. And then yesterday, the show is cancelled. It would have made sense to end the show after the 5th season, when Abados was destroyed and Daniel Jackson ascended. Or in the 8th season when the Go'a'uld and the replicators were both eliminated. But now the new Ori storyline is going strong and needs at least one more season to play out. The SciFi channel was really short sighted. They should have worked out a deal to make the 11th season the last, pulling in huge ratings as the Ori storyline finished up. But instead they just cancelled it. One of the executive producers has declared the show will go on in some form. I'm hoping that will be a kick-ass mini-series to finish up the storylines.

Special thanks to DTVB reader David for the heads up on this news.

Comments:
Poor Ben Browder. He sure gets a regular effing from the SciFi channel.