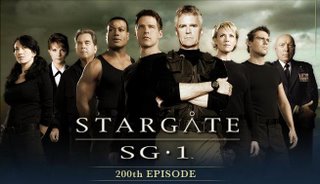 Stargate: SG1 hits its 200th episode tonight. The last science fiction show to hit this mark was the X-files. There was little celebration since the 204th was already planned to be the last one. Stargate has come a long way since it's initial four year run on Showtime. The pilot episode being on a premium channel had naked breasts. The 5th season finale was written to be a series finale with the death of Daniel Jackson. But the ratings on SciFi channel proved good enough to continue on and even do the spin-off, Atlantis. I was asked this morning what was my favorite episode. I've decided it is between A Matter of Time or Window of Opportunity. Of the Ori episodes I have to pick Beachhead. Tonight's episode is supposed to be fun and full of laughs. MacGyver returns for both SG1 and Atlantis episodes.

Comments:
EMERGENCY!! I just read on digg that SG1 has been cancelled!!

btw, to enjoy more of my clever insight see my blog Champagne Buffet at http://champagnebuffet.wordpress.com.