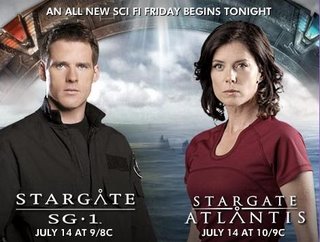 She'd be Star Gates! And that's what on tonight. We have the season premier of Stargate: SG1 and Stargate: Atlantis. Two Star Gates! And for the severe couch potato the shows are preceded by two documentary specials: The Science of Stargate and The Search for Atlantis. Oh and don't miss Pysch and Best Week Ever also on. My TiVo will be working overtime.

On SG1 they are going to be dealing with the aftermath of the Ori battle that took out seemingly every ship in the fleet leaving Col. Carter stranded on the Supergate in a spacesuit. On Atlantis the Wraith have figured out a way to find Earth and are heading for a great feast. Or will they be stopped somehow?

This marks the 10th Season of SG1 making it the longest running SciFi series ever. It is passing X-Files which had nine seasons and 202 episodes.

Comments:
Sweet! I am glad this is back on. Who will reach Earth first? -- The Ori or the Wraith?? It sounds like they are still filming both shows up in Vancouver. I have always wanted to go up and try to get on to the set.